The Story of Edam Cheese 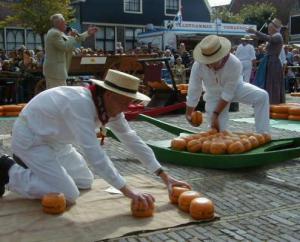 The Edam cheese is known worldwide. From the breakfast buffet in a restaurant in Italy to a supermarket in America. Nevertheless, Edam cheese is interpreted differently everywhere, and the real Edam cheese can of course only be found in Edam and in the surroundings themselves. In this blog I will tell you more about the origin of this beloved cheese and of course about how you can discover the world of Edam cheese for yourself.

The origin of the Edam Cheese

Originally, the Edam cheese is a spherical cheese of about 1.7 kilos. This cheese was made around the North Holland town of Edam. In the 14th century, Edam grew into an important port for the export of dairy products. Probably that's why the cheese was called Edammer.  The trading city of Kampen played a major role in this. Via Kampen the cheeses also came to Germany. Argelloo designated the period between 1439 and 1441 as the birth years for the Edam cheese.

In the 17th century, the Netherlands where already known for its cheese and butter. The Edam cheeses were ideal to transport by ship. They were used as provisions but also as a medium of exchange for spices.  Cheese was traded in various regional markets in the Netherlands, including Edam. The cheeses were brought here by boats because of the large amount of water.

The first three centuries were a huge flowering period for the Edam cheese. All the round small cheeses that were made above the Y were called Edam cheese. Within the North Holland cheese trade, the city of Edam occupied a fourth position.

The quality of the Edam cheese has always been an important part and evident from the report for making the North Holland cheese, drawn up by the Committee of Agriculture in Amstelland in 1810. It described that the Edam cheeses had to be hard inside and round of decency.  The Edam cheese is a 40+ cheese. This means that there is 40% fat in the dry matter. With the Edam cheese, this translates into an absolute fat content of 25% per 100 grams.

At the end of the 20th century, production for the Edammer largely stopped. All over the world as I mentioned in the introduction, cheese was made under this name, often of poor or moderate quality. Today, the Edam buckets are only produced in two factories.  However, an exclusive Edam cheese has been put on the market again and the Edam cheese has been a protected name for several years.

The cheese museum in Edam "The Story of the Edam Cheese"

In my previous blogs I have already told and mentioned that I live in Volendam less than 5 minutes by bike from the city of Edam. However, I had never been to the cheese experience or the spectacle of the cheesewaag in the summer before I started writing about the beautiful region in which I live. This summer I changed that. The small cheese museum, or “The Story of Edam Cheese” at Spui 9 was my first stop. The funny thing is that I have often walked past this building from the 16th century without knowing what is going on inside. Actually, it looks like a small farmhouse in the middle of the city. Of course, the perfect location for this cheese experience. If you take 1 step inside, you can already see exactly what you came for, the Edam cheese. What is immediately striking is the large set-up of the experience, which means that the experience is also wheelchair accessible.

The entire experience consists of various audio stories about the Edam cheese. For example, you will learn why the Edam cheese is yellow on the outside in the Netherlands and red in other countries and how the farmers' wives already made "Cleyne Casekens" in the 14th century. Very interesting. If you listen to all the audio stories, you will be occupied for a whole hour. The stories are fascinating to listen to because they are recorded with wonder, humor and pride. This experience is also fun and educational for children.

The design of the experience exudes courage and history. The restored wood trusses and medieval walls are still intact. In the second audio tour about the history of the building itself you will learn all about this. Even as a resident of Edam or someone like me who knows quite a lot about Edam, you still hear unknown interesting stories. It can rightly be said that Kaasmakerij Willig has done everything to make the history of the Edam well known for the public. After the experience you will end up in the wine & specialty store where you can of course taste the Edam cheese. This is also an attractive shop where you can buy different types of cheeses. Near this shop is the Cheese scale of Edam where cheese wearing is demonstrated in the summer.

The Cheese weighing-house in Edam

The Cheese market in Edam is still in operation, but only in the summer for the tourists. This cheese market gives you a good idea of how the cheese was traded in this place until the thirties. This spectacle will take you back to the origins of this world-famous cheese. Be on time because the cheese market in Edam is the most visited in the Netherlands. From April to September there are folkloric demonstrations every Wednesday. The cheese carriers then show how the heavy round Edam cheeses were transported on berries as it used to be. This takes place on the square in front of the Cheese weighing-house. The weighing-house dates from 1778. In earlier times, the 'Edammertjes' were weighed here and buyers were sure of a controlled price. Here you can also take a look inside when you are there. In this building there is a permanent exhibition about the art of cheese making. Cheese tasting or buying is of course also possible here.

Packed with cheese, I came back home from my day of "cheesewatching”, as I call it.  I was able to enjoy a few delicious pieces of Edam cheese for a long time and I will remember the story of this world-famous cheese forever. Do you also want to eat a nice piece of cheese after reading this blog? Then come and taste it this summer at the cheese market in Edam or book a quick trip to the cheese experience.