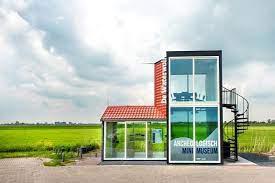 The best of both worlds in the polder

During one of my first bike rides towards the Zeevang I came across a special, small building on the edge of the dike. I did not give it more than a look that first time because I was on my way to the school of Dik Trom. Yet curiosity won it over my ignorance, and I asked the lady at the school about the building. She told me that this was the archaeological mini museum the Waterwolf. The museum owes its name to the battle that the North Hollanders fought with the sea for centuries. With every dike breach, people died, and valuable land was lost. You will not believe it, but even the old village of Etersheim disappeared in the waves. But this did not get the population under it. Repeatedly, they built better and new dikes until they had conquered the 'waterwolf'. After reading the mini story book by Dik Trom about this battle with the water, my curiosity was so big that on the way back I immediately stopped at the mini museum.

The gold treasure of Etersheim

The mini museum is very modernly decorated inside so that all the treasures come into their own. The finds range from a shoe and a jug to special objects such as old coins. These archaeological finds and the surprising presentation together tell the story of the drowned village of Etersheim, the battle against the sea and the formation of the landscape as we know it today. I recommend that you first read Dik Trom's booklet about the drowned treasure of Etersheim if you go here with your children. The story about the legendary gold treasure of Etersheim and the sarcophagus that surfaced off the coast in 2009 becomes even more exciting. At least for me as an avid reader and fantasist, this gave an extra dimension to the story.

Augmented reality in the mini museum

It is even possible to go into the soil with a virtual drill up to about one thousand years back in time. The virtual showcases with augmented reality also ensure that you discover even more information about the objects, such as the date, the location, the era, and the use. At the large table in the museum, it is possible to play a game with your company on the basis of image projection to find out who knows the most about the sea, the dikes, and the polders. Then I have not even mentioned the amazing view of the polder through the windows.

Fancy a snack and a drink after processing all this information? Then you do not have to pedal far anymore. Visitors center de Breek is on the route and lies entirely in the extension of the story of the dikes and the polders. Here you can learn even more about the flood disaster that took place in 1963. In the summer you can enjoy a piece of homemade apple pie with a refreshing drink or a cup of coffee on the terrace. This of course with a view of the old mill and the sheep.

The polder mill has been restored and can also be visited. You will find a miller's house as it was decorated around 1900. The cottage is furnished as it was in the time of the miller including boiler, coal stove and a box bed. It is always fun to tell kids that people used to sleep almost upright in a box bed. In the hood of the mill, you get a good impression of the impressive interior. After the restoration, the mill was made fully grindable again so that it can be used in case of heavy rainfall. It is possible to book a tour at the mill, but of course you can also go on a discovery tour yourself. Beware because it is said that the spirit of the miller's wife still roams the mill after the fire in 1886, since after the fire every trace of her was missing.

After these two nice trips you can choose to cycle a bit further and continue the round to Oosthuizen. Of course you can also cycle the part along the dike back to where you started. For me this was a wonderful bike ride back to Volendam with the wind in my hair and a gentle nudge in my back.